Peace Through Strength – Stop The Deal!

By Rabbi Mark Wildes
July 21, 2015
As seen on The Algemeiner

When it comes to arguments or debates I’m usually pretty good at seeing the “other side”. My years spent studying Talmud and going to law school have taught me that life is complex and there’s always another perspective. But when it comes to the deal the US Administration has brokered with Iran, I just don’t get it.

Does the administration truly believe the Iranians will keep their word and honor this agreement? We all know the only real gauge of any country’s future performance is their past performance and based on what we’ve seen with Iran and their nuclear program in the past, what is our government thinking? Even if the deal is honored (with a big “if”), it still allows for a nuclear Iran in another ten years. And my biggest problem with the deal is what it does right now: pumping vast amounts of money and support into the hands of the largest terrorist sponsoring government in the world. Are we so naïve as to not believe that this American funding will not find its way into the hands of Hamas, Hezbollah and other terror groups Iran finances?
IT’S NOT DEAL VS. WAR
Many that support the deal are labeling the opposition as warmongers. They are painting a picture that turning down this deal is synonymous with a step towards war with Iran. This is simply not true. The alternative is allowing time for sanctions to create a situation where the Iranian economy is so bad that either the government becomes so desperate they have no choice but to agree to stop their nuclear ambitions or their own people force them to do so in order to improve the economy. In short: the alternative is NOT WAR — it’s staying strong and insisting on a better deal.
PEACE THROUGH STRENGTH
Peace is the ultimate goal, let’s not forget. As Jews we pray for peace every day. In the Grace after Meals (benching), we conclude the prayer with the well known phrase :

President Obama’s general strategy of reconciliation and negotiation, while appropriate and even admirable for some countries, is not appropriate for every situation. This is the Middle East, not Sweden or some other peace loving country. In this playground, there are a whole different set of rules. Jordan and Egypt, the only two Arab countries to ever make peace with Israel did so because they became convinced that Israel could not be defeated militarily, and because they weren’t run by religious extremists. Iran is not intimidated by Israel’s military prowess and it’s a country run by religious fanatics. However, it has also shown that it responds to strength. Interestingly, the ONLY time in history Iran actually suspended its nuclear program was in 2003, when the U.S. was already in Afghanistan and then went into Iraq.

No, peace can not be forced by might, but it can be earned. Peace is not a deal, it is a process, and sometimes the right next step is standing strong and holding out for the right kind of peace, even when it’s scary.

TAKE ACTION
For these reasons and more I strongly encourage you and all peace-loving people, Jew and non-Jew alike, to take action. Here is what you can do:

Too Many Options! Creating True Freedom Through LimitationsRW-blog 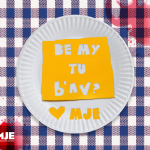 How to Love the Jewish WayRW-blog